Wondering what Brody Jenner and Kaitlynn Carter are up to in the wake of their insanely dramatic summer? Apparently, they just flew home from Bali together—which happens to be the place they got married two years ago. (Well, more like “married” but whatevs.)

Before you assume these two are back together, turns out they were simply both attending a mutual friend’s wedding and decided to fly home together. Kaitlynn even posted about it on her Instagram Stories, and Entertainment Tonight grabbed the evidence before it expired: 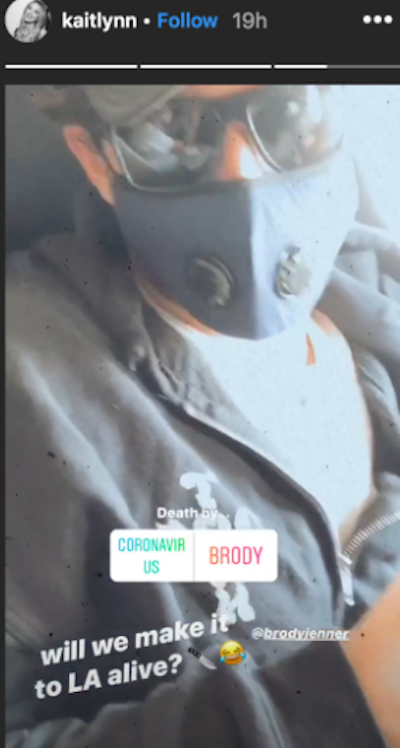 As a reminder, Kaitlynn and Brody got married in 2018 and split up in August, 2019. However, their marriage wasn’t legally binding—something they opened up about during The Hills finale.

“Right before we went to Indonesia to get married, we started talking about getting our license here in the States, but we had a lot of, like, financial things that we needed to work out,” Kaitlynn explained in an on-camera interview. “We realized, like, you know, we just want to focus on being excited about Indonesia and our wedding there, so let’s just deal with it when we get back. But we haven’t gotten around to it yet.”

Meanwhile, Brody told Spencer Pratt, “We met with attorneys and sh*t like that two weeks before we left for Indonesia, went and got married in Indonesia, and ever since then, we’ve both been incredibly busy. We just haven’t gotten around to going to do it in the whole courthouse or however we’re going to decide to get legally married.”

Clearly these two are still close friends despite a dramatic few years. You love to see it!

Bachelor Fans Are Convinced a Spoiler Was Tweeted