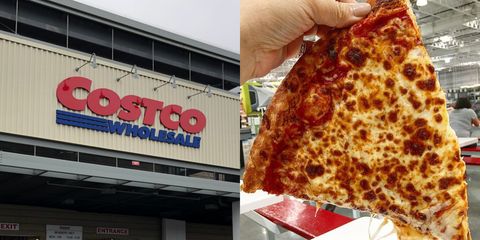 Costco has legions of loyal fans for lots of reasons. It has a delicious bakery section, bulk products that no one else has, and relatively low prices, to name a few. But one of the best parts about Costco is something that can be accessed by anyone: the food court. That is…until now?

Instagrammer @CostcoDeals shared a photo of a sign that says non-Costco members will lose access to the food court starting in about a month. NOOO!

“Effective March 16, 2020, an active Costco membership card will be required to purchase items from our food court,” the sign reads. “You can join today. Please see our membership counter for details.”

People were understandably devastated in the comments. After all, the Costco food court is home to treats like hot dogs and pizza beloved by everyone from Julia Child to the rest of us mere mortals.

“Going to lose out of a lot of money from customers who don’t have membership that do purchase from the outdoor food court,” one person wrote. “This is so lame honestly, what exactly do they need it for is not like we getting a hotdog for free lmao,” another said. “As a paying member I support this,” someone else wrote.

@CostcoDeals pointed out that this may vary by location, but later added it had been confirmed as part of a large roll-out. We reached out to Costco but the company had no comment on the matter.

However, it looks like this has been confirmed by Clark.com, which reported a similar statement to the one on the sign.

“Effective March 16, 2020, an active Costco membership card will be required to purchase items from our food court,” a spokesperson confirmed to the site.

Some people have weighed in on posts about the change, saying that various Costcos have had similar policies in place for a while now. However it does seem like this news could be part of a larger change, as other people who identified themselves as Costco employees in the comments @CostcoDeals’ Instagram said they’ve been told recently of the policy.

In case this spurs you to finally join Costco, memberships start at $60 a year. Otherwise, you’ll just have to savor the delicious hot dogs and churros while you still can.

People Are Going Crazy for This Vegan Queso Dip