Sorry, But Nothing Will Ever Top Justin Bieber’s “Purpose” Era

The year is 2016. The Snapchat puppy filter is your go-to flirting tactic. You’re bizarrely attracted to any guy who can pull off a long t-shirt and super skinny jeans. (Bonus points if he’s wearing Yeezys or has a flannel tied around his waist.) You’ve used the lyrics to “What Do You Mean?” as a caption for your last three consecutive Instagram post, which were probably all taken at parties where “Sorry” was played a minimum of five times. Justin Bieber’s Purpose era is at its peak.

For Beliebers, the Purpose era was truly the golden age. It was the time when the universe unanimously admitted Justin Drew Bieber’s music was really objectively great, and marked his transition from the kid who once peed in a mop bucket at a restaurant to an actual adult musician. It was a fantastic time to have Bieber Fever…but it didn’t last very long.

Justin has just released Changes, his first full album since Purpose. If you’ve been keeping track, a LOT has gone down in the time between these two drops. To Justin’s credit, he has been dealing with some major health issues and “difficult seasons” in the past few years. So in all seriousness, it’s great that we even have any new music at all. However…Changes could NEVER even touch Purpose.

Purpose was a super dynamic album, and truly had a song for every mood. (Seriously. I ugly cry while listening to “The Feeling” then vibe out to “Company” directly after at least once a month.) His choreography was always on fire, and people just naturally flocked to every single thing Justin did. He was truly untouchable.

Unfortunately, Justin’s music has lost a lot of that charm with Changes. First of all, he kicked this album cycle off by hopping on social media to beg fans for streams. That would literally be like Jeff Bezos hopping onto Instagram Stories to be like, “come on, guys. I really need you to shop at Amazon this month, or else we might not make it.” Like, stop! We were all obviously going to listen to “Yummy” the second it dropped! Coming from a mega-successful pop musician, this kind of behavior is “yikes” enough for me to rest my case right here, but I’m not quite done yet.

Changes just doesn’t have the same range as Purpose. To be honest, most of the songs sound the same! After the first listen, I was unsure if I had started back from the beginning, or was continuing to make my way through the rest of the tracks. It’s also probably worth mentioning that Biebs is now a married man. Sure, Hailey Bieber seems like a very nice girl, but let’s face it. Married-guy songs just hit differently than single-guy songs. Worst of all, I’m pretty sure he wouldn’t be able to crush any of that old choreography while rocking House of Drew slippers! It’s just not physically possible! (This feels like a great time to mention that the Purpose tour aesthetic was SO HOT! He looked so cool ALL of the time, and if I could go back in time, I would purchase every piece of merchandise available.) 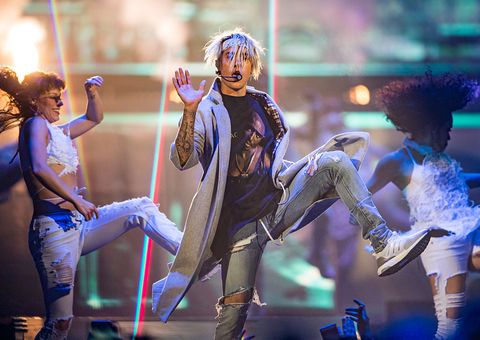 Before you blow up my mentions with messages about how a true Belieber would love Justin unconditionally…I would like to add that I will always love this dude. I have stood by him through too many questionable facial hair phases to back away now. I’m just saying, you can’t have every album be your best album, and in JB’s case, Purpose is going to be very tricky to beat.