The Existence of ‘Katy Keene’ Debunks This Major ‘Riverdale’ Theory

With anxiety building over whether or not Jughead is dead on Riverdale, we’ll take any scrap of hope thrown our way. But unfortunately, one of the many theories that could keep him alive might have just been debunked. Doesn’t the mere existence of Katy Keene mean Riverdale isn’t happening in Jughead’s head?Surely Jug didn’t create a whole cinematic universe about his friends’ friends’ friends… right?

What this wild theory actually says

The idea that this is all Jughead’s head, as a part of his book, makes sense. Every new Riverdale begins with a “Chapter” in the episode title, and Jughead’s narration feels like it could be part of a novel he wrote himself. The show began with him writing his novel, alone, at Pop’s Diner. That could be a framing device setting up some ultimate “Jughead wrote the whole thing” reveal. Plus, there’s definitely some shady stuff going on with Jughead’s Baxter Brothers manuscript on Riverdale this season, and the fact he’s already freely adapting and embellishing his own story is suspect as hell.

Why it’s total b.s., thanks to one Katy Keene

By now, Katy has appeared in scenes with Veronica on Riverdale and Josie (a lead on both shows) has referenced Veronica on Katy Keene. In episode 2, Josie not only mentions Cheryl and Jason Blossom, but the fact that “one of them died.” Jason Blossom’s death kicked off Jughead’s Riverdale narration, a.k.a. the show itself. So if that happened in the world of Katy Keene, then everything that happened on Riverdale did too — because I refuse to believe that Jughead is making up both shows. 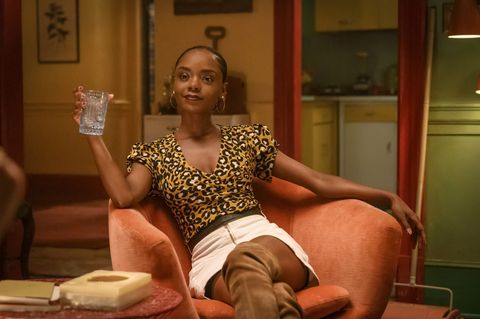 According to the original theory, Jughead has been documenting (and perhaps changing) events that really happened to him and his friends. As far as we know, Jughead hasn’t met Katy Keene. He hasn’t visited her New York City, and probably wouldn’t be all that interested in their world. Jughead’s all about writing what he knows, and he knows nothing that’s going down on Katy Keene.

The Chilling Adventures of Sabrina factor

Don’t even get me started on CAOS, which technically takes place in the same universe as Riverdale too, though only one character has (briefly) crossed over and died soon after thanks to the Gargoyle King. If Riverdale is happening in Jughead’s head, I’d definitely be more likely to believe that Jughead heard rumors about the next town over and fantasized that it was inhabited by a Satanic coven lead by a teenage witch, but that still feels so far-fetched.

So where does that leave us?

Sorry to this theory, but I just don’t think three shows are going to simultaneously reveal that they’re all from the mind of one beanie-loving teenager. What would be the point of watching Sabrina and Katy Keene if none of it mattered? If you were convinced that Jughead isn’t dead because he’s just making all of this up, you’re going to need some new evidence. I don’t make the rules!

When Is ‘Katy Keene’ Set in Relation to Riverdale?